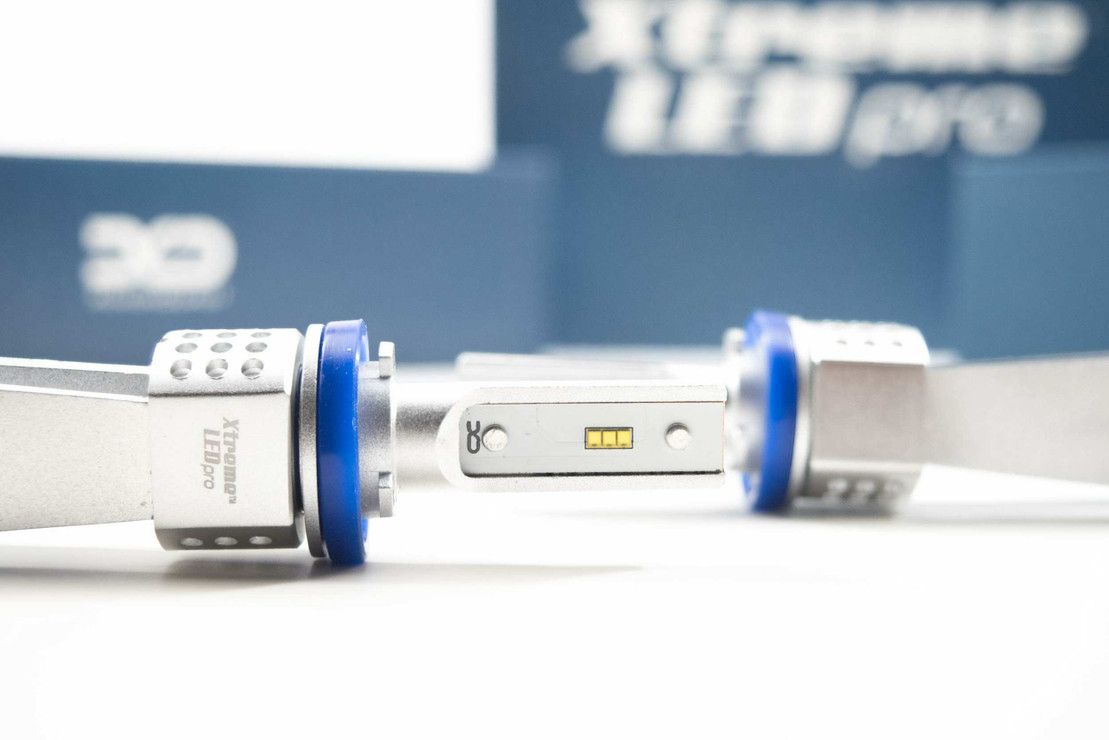 XTREME LED PRO: Xtreme LED Pro series of drop-in headlight bulbs are just better--right from the start. They incorporate today's most advanced components and features for unparalleled compatibility and performance. Hold one in your hand and you'll immediately discern their uncommonly high-quality fit, finish, and feel: they're made of premium materials, formed and assembled with precise craftsmanship.

OPTIMAL HEAT DISSIPATION: The next thing you'll notice is their all-new patented aluminum alloy leaf passive heat sink. Its compact and readily configurable design allows an easy fit in most any headlamp housing, and with its much larger contiguous thermal path, it does a better job shedding heat off the LEDs than past-type flexible mesh heat sinks. With no flex-mesh junctions to break and no motorized fans to make noise and electrical interference, clog, or fail, the superior heat rejection performance of the alloy leaf passive heat sink is retained over the long haul, for the full rated life of the emitters. That translates directly to excellent performance; the cooler LEDs can be kept, the higher their output.

BEAM PATTERN: The emitters themselves are genuine Lumileds ZES, three on each side of the light head, and this together with their undomed configuration means they closely replicate the size of the original halogen filament. That means a better optical match than longer 4-emitter arrays or domed COB emitters, both of which violate the light source box your headlamp's optics were designed around, and because the high output comes from three chips rather than four, luminance is higher for better beam punch and spread.

LUMENS & LIGHT OUTPUT: Anyone can throw around inflated lumen numbers--and most vendors do. Some of those numbers have no basis in reality, they're just fibs. Some of them are somewhat accurate, but only immediately after the bulb is lit up in a cold chamber, without accounting for the significant 'droop' that happens when improperly chosen emitters are inadequately cooled--don't drink the kool-aid! The Xtreme LED Pro bulbs are rated honestly: 1750 lumens stable, measured after the bulbs have been operating continuously for an hour in 60C heat. That's a rating that means (and gives you) exactly what it says. With the 5500K color temperature of our emitters, we're giving you true white light, not artificially jacking up the lumen rating with a bunch of useless deep-blue light that can only attract unwanted police attention, not help you see.

IN SUMMARY, THEY'RE JUST BETTER: There's more clean-sheet engineering where you can't see it: we've used copper circuit boards for optimal thermal conductivity, and our compact base means the rigid tail of the light head is only 25mm--much smaller than other LED bulbs on the market. You'll note the light head is remarkably compact, without bulky over-length that prevents many other LED bulbs from fitting all the way into many headlamps. And the light head is clockable, too, so you can fine-tune the output for the best optical match with any lamp you might install them in. Truly, this is the top-performing LED bulb with OE-level quality and "fit it and forget it" durability and dependability.