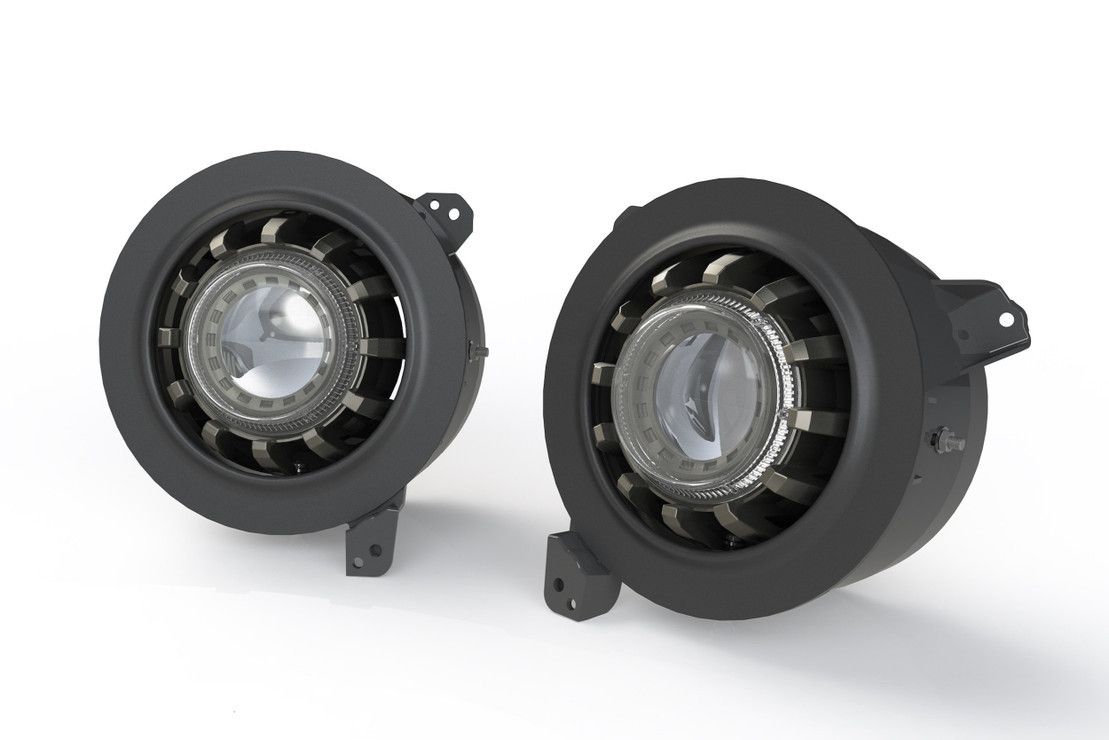 No doubt the new Jeep JL is the bigger, badder, more refined Wrangler we've been waiting a decade for, and if you've already upped the ante with a lift, bigger tires, wider wheels, and more power, then it's time to ditch the stock lighting setup too. With hundreds of options out there for JK's but not yet the JL, these are a sure to be a welcome addition in the Wrangler aftermarket! We've seen some similar products for the JL pop up already, but it's no shock they were early to the market. The other options out there offer zero adjustability, so your ability to A) See well and B) avoid blinding oncoming traffic will definitely be compromised. With the Jeep JL LED Headlight adapters from Morimoto, that's not the case. You have full vertical and horizontal adjustability! The Super7 is the world first high-performance, fully modular Bi-LED replacement for all industry-standard 7in Round Headlights. Nothing comes close to offering the same quality of light, the ability to customize the look, or the ease of assembly. We are just as bored as you are with today's selection of 7" LED headlights for Jeeps, and that's why we're so excited about Morimoto's new Super7!

Unlike other options on the market that use reflector or generally inefficient multi-optic projector based setups, the Super7 now embodies the Morimoto M LED 2.0 projectors. We love good old HID-powered projectors more than Kanye loves Kanye... BUT....Truth be told, The new M LED 2.0 is the best Bi-LED projector currently available. At the same time, it's better than any Bi-xenon. Put simply it's hard not to like the new M LED 2.0. The performance unparalleled. The simplicity is sublime. The instant on is awesome. The original M LED was great when it came out, but by today's standards it's no longer on the leaderboard. Now it's two-point-o time! We'll just start with the hotspot. It's brighter than a D2S 5.0 with a CBI and 50w ballast, and 10% brighter than it's closest LED based competitor. The Kuria optic clear lens and koito-esque beam shaper produce a beam pattern that's way wider than a D2S 5.0 too. Their ECE-sloped beam pattern is super sharp and colorful. You can expect up to 83,000 peak CD--that is a lot of light. Width and intensity are common characteristics that are easy to engineer and explain, but it's important not to downplay the importance of distribution! 80% of the optical engineering hours went into optimizing the way that every last lumen ended up on the road in the name of maximizing visibility both up ahead and off to the sides of the road. Each facet of the M LED 2.0's dual reflector bowl was carefully considered (and re-considered, and re-considered again) to ensure that the results were nothing short of perfection (both by the numbers, and subjectively). Yoshi Ishida, Morimoto's chief engineer, Yoshi Ishida, you nailed it. We don't really need to talk about how different this thing looks, we know you can see it. BUT, it's worth noting that the headlight isn't just designed this way for the hell of it. The aerodynamic design is purposeful in order to allow airflow to pass through the housing and cool the integrated heat sink at the rear - which is mated to the Bi-LED projector. Form indeed follows function, but it just so happens that form ended up a winner too.

Because modifying Jeeps is about making them unique. The Super7's modular design allows them to easily be customized. Want to add halos inside? hell yeah. Want us to etch the projector lenses with something special? easy. Want to color-match the housing to your Jeep? Go for it! Because they arrive to you ready-to-assemble: there is no need to take them apart in order to do what you wanna do with them, and we think that's awesome. The Super7 Headlights were designed specially for use on Jeep Wranglers. Countless prototypes were produced, fitted to a JK, and modified until the end result was something that fits like a glove. Zero interference with any structural components behind the headlights. No need to relocate the airbag sensor. Directly compatible with the existing mounting rings and hardware. Here, customizing your Jeep doesn't mean compromising your Jeep. And flicker-free! There is no bulky/complicated relay harness to run for the Morimoto Super7 Headlights. Just mount the external LED driver behind the housing, plug in the H13 or H4 connector to the factory outlet, and you're ready to roll. For more than a decade, we've worked hard to earn our killer reputation. Car guys world-wide know that TRS carries the internet's best selection of high performance automotive and powersport lighting products at the best prices, and we've got the best, most knowledgeable team of real enthusiasts to help back it up. If we sell it, then you bet we've put it to the test on our own cars, trucks, and bikes