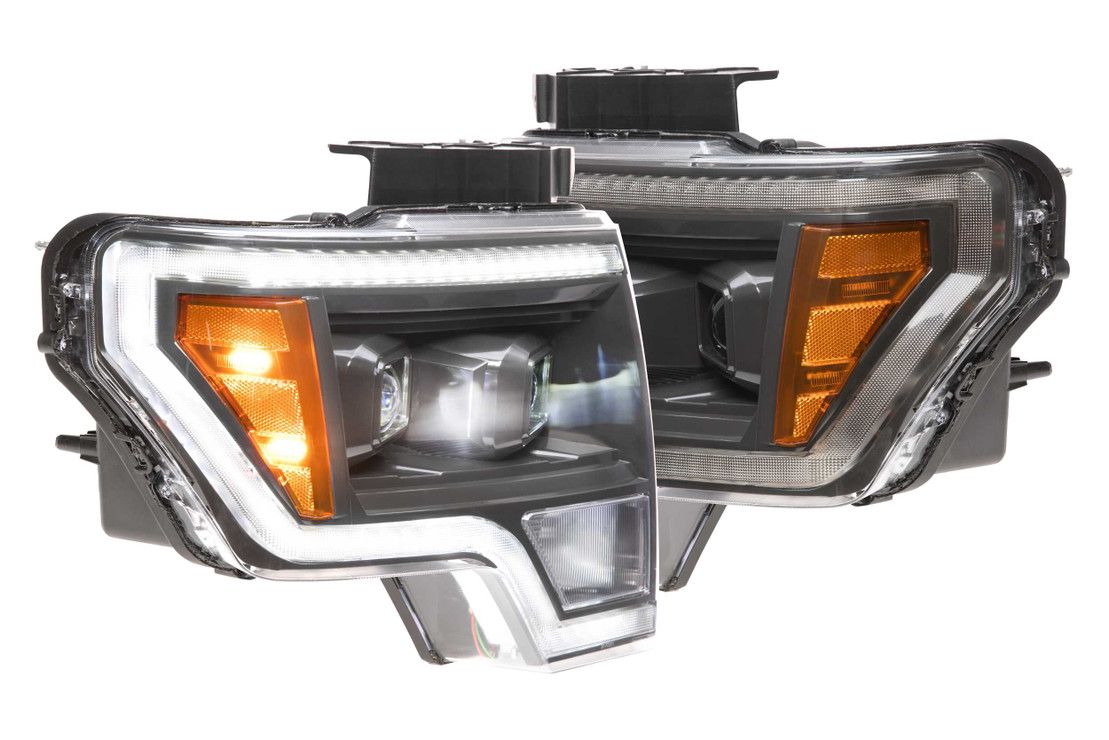 When the high-end version of these headlights launched back in late 2019, we sold out instantly. We sold out again, and then again... and it wouldn't be a shock if they were still on backorder. 12th gen 150 owners have proven to us two things First: Until Morimoto did it For a truck that's been around for 10 years, its amazing no other company in the aftermarket has yet to develop a worthy headlight assembly. Second: Aging or not, You guys haven't stopped investing in the best parts for your trucks. As car guys ourselves: we can certainly respect that... but there is good news too. Now you can get a taste of the best from Morimoto with the new Hybrid version of the XB's. Coming in at a few hundred bucks less than the original recipe, here's what they're all about. Using a combination of both LED & Incandescent bulbs (thus, "Hybrid") these offer much of the same amazing features that the original. Their LED daytime running light is still insanely bright, easily visible during the day. The optics used in the DRL are identical to what's in the big-boy version of the XB's, which is awesome because that's definitely one of the best and most distinguishing features of Morimoto's headlights.

They use the same OEM-grade housing that won't fade or yellow over time. Inside, the diffuser for the DRL is the same, smoked setup, but they do have an amber LED side marker... and a halogen turn signal bulb lives in that little pocket on the bottom of the housing. They offer the same five-year warranty too. The XB Hybrid headlights have a powerful, wide, and bright LED low beam projector, and a dedicated LED high beam projector too. Their optics were specially developed just for use the new lineup to produce a killer beam pattern despite the affordable price point. To put all of that in perspective, They WILL blow away something like an HID or LED kit in the stock reflector headlights. They WILL destroy a set of aftermarket F150 projector lights from something like Anzo with an HID or LED kit. They WILL outshine the OEM Bi-xenon F150 headlights found later 12th gen trucks. They might not be quite as bright as the high-end version of the F150 LED headlights from Morimoto with three projectors, but will be about on par with most custom projector retrofits. These are much more than an aesthetic upgrade, they will illuminate the road much more effectively too.

They're also completely DOT approved. Their LED projector optics meet & exceed all SAE, DOT, and FMVSS108 regulations when aimed properly... which is pretty easy to do using the adjuster screw on the back of the housing. These things are designed to work on your truck without any modifications. There are only three connectors that are simply plug n play with the factory wiring. One for the low and high beam, one for the turn signal bulb, and one for the DRL. If your F150 is due for a little face lift. You want something that looks good. You want to see better at night. You don't have the time for a retrofit or a G to spend on the higher-end version of the XB's, The Hybrids are your answer. Simple as that guys. For more than a decade, we've worked hard to earn our killer reputation. Car guys world-wide know that The Retrofit Source carries the internet's best selection of high-performance HID and LED lighting upgrades for their car or truck at the best prices, and we've got the best, most knowledgeable team of real enthusiasts to help back it up.