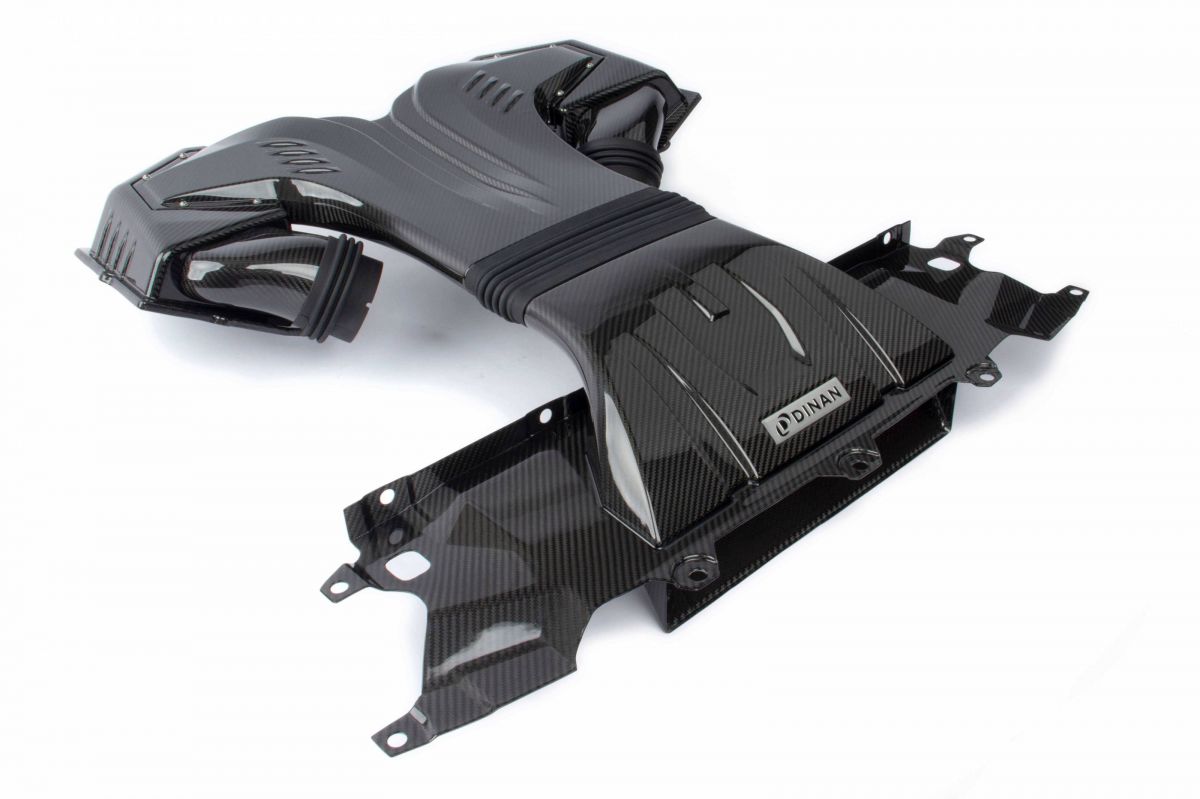 Being the quintessential performance SUV in the marketplace, the X5M is the perfect canvas to showcase a work of art for the entire enthusiast community to see. Creating an indelible mark upon the vehicle, and in particular, the engine bay, the Dinan carbon fiber cold air intake is not just a work of art but a piece worthy of bearing the label of "masterpiece."

With gloss UV-coated carbon fiber stretching from the front of the engine compartment to the rear, it's hard not to be impressed by the sheer volume of carbon. The majority of it is comprised of a fully functional secondary air inlet which doubles as an ornate engine cover. As such, signature BMW engine cover design elements signifying the cylinder count are integrated into the design for factory-like continuity and a nod to a long history. The cosmetic beauty of the system does not solely derive from the presence of carbon, however. The immense central passage also purposefully bisects the engine compartment to ensure the factory bracing, which is impressive on its own, is visible. With both OEM and Dinan elements showcased simultaneously the overall engine bay retains symmetrical harmony and commands attention at all corners.

Beyond outward appearances and upon closer inspection details emerge which showcase the level of care taken in the intake systems design beyond simply aesthetics. For instance, the secondary air source is deriving its contents from an unobtrusive central hood scoop located behind the front grilles that feed into the newly formed inlet hump at the front of the engine bay. Through constant CFD analysis, the design of the scoop and secondary inlet continually underwent improvements in order to meet the demand of an even and unagitated air supply to each air box. In its final form, accents in the carbon both provided a visual embellishment as well as created the outward manifestations of the runners used to direct and smooth the secondary airflow. The additional airflow ultimately supplements the factory inlet locations on both the left and right air boxes with ambient air from outside of the engine compartment. These airboxes have been enlarged and equipped with massive filters to handle this increased volume and together with the rest of the system allow the intake to flow as efficiently as possible.

While the stock intake system is adequately suited to support up to stage 1 power levels, that does not mean there is no performance benefit when upgrading to the Dinan system. Besides its jaw-dropping appearance the biggest advantage of the system, by virtue of additional and optimized flow, is the reduction of the pressure depression in the stock system. This equates to the turbo having to work less in order to achieve targeted power. With the turbo working more efficiently this also means lower pre-turbine backpressure, lower turbocharger shaft speeds, lower turbocharger compressor discharge temperatures, and the ability to achieve higher boost pressure levels. Paired with the natural improvement to throttle response, a bump to the acoustics, and an unequaled visual appeal the Dinan F9x X5M/X6M carbon fiber intake system can wear the self-appointed moniker of "masterpiece" without trepidation.