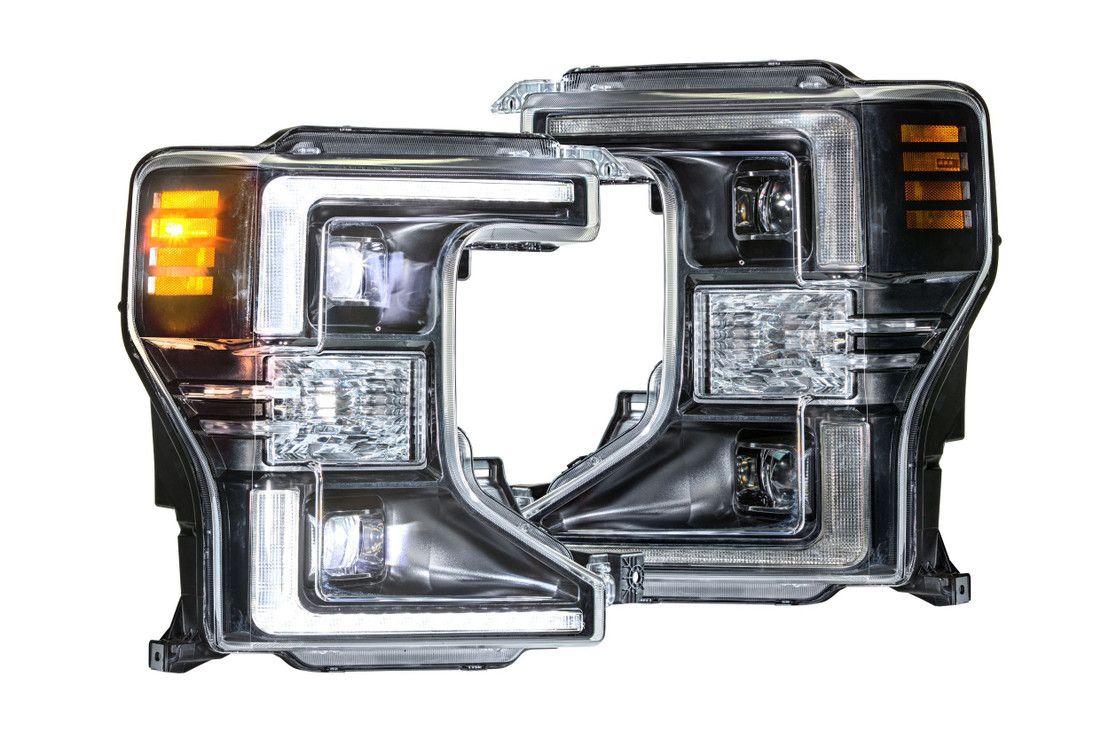 BANG FOR THE BUCK: The XB Hybrids for the 2020-2022 F-250/F-350/F-450's share many of the same core components developed for the top of the line series from Morimoto, without some of the features that make them considerably more expensive. That said... the Super Duty Hybrid LED headlights are hardly a compromise. True reflector optics for the DRL. Killer light output. Good Looks... all wrapped up inside of an OEM-grade housing and backed with a solid five-year warranty. Compared to the more expensive Morimoto XBs, these use two projectors (instead of four) and use the standard halogen bulbs for the turn signal (rather than it being integrated into the outer daytime running light strip)

HYBRID SPEC: Using a combination of both LED & Incandescent bulbs (thus, "Hybrid") these offer much of the same amazing features that the original. Their LED daytime running light is still insanely bright, easily visible during the day. The optics used in the DRL are shared with the high-end version of the XB's -- which reallly kicks ass because that's a fan favorite for those who are shopping for an upgrade.

HIGH PERFORMANCE: When it comes to light output, these Super Duty headlights surely will not disappoint. Not all Ford guys are all about the bling-- light output is important too--and there is no lack of luminosity here. the Hybrids have a powerful, wide, and bright led low beam projector, and a dedicated led high beam projector too. their optics were specially developed just last year specifically for use the hybrid lineup to produce an amazing beam pattern despite the affordable price point. unlike other "headlight upgrades" that look decent, these look great, and will most definitely make driving in the dark a pleasure. Bring on the night!

STREET LEGAL: They're also completely DOT approved. Their LED projector optics meet & exceed all SAE, DOT, and FMVSS108 regulations when aimed properly...which is pretty easy to do using the simple vertical adjuster on the back. These are much more than an upgrade that looks good, they're going to far out-perform most other headlight upgrades you can buy too.

WIRING: When it comes to wiring, it doesn't get much easier than this. The Hybrid headlights are designed to work on your new Super Duty without any modifications. They will plug into the factory H13 three-pin connector for the stock headlights, and will work seamlessly without any issues at all. Since they re-use the stock halogen turn signal bulb, you don't have to worry about adding resistors or any of that nonsense to avoid hyper flashing either. You will however have to add one cable, which comes included, to power the DRL--but that's plug n play with one of the slots in your fuse box. No big deal.

I DON'T KNOW ABOUT YOU: But we are a big fan of anything that packs a lot of bang for the buck -- and these new Hybrid XB's from Morimoto have it all.